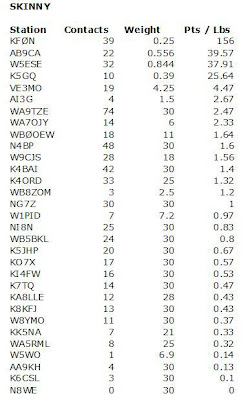 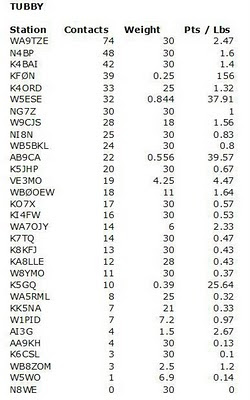 For an enlarged view of the scoreboards, please click on the images.
Posted by Richard Fisher, KI6SN at 1:45 PM No comments:

KFØN
WOW!  What a contest!  There were more stations on the air than I have heard in quite a long time.  Amazing what a little more sunshine on the old "F" layer plus some new sunspots can do for the HF spectrum.  Conditions on 40M were wonderful.  So many guys were calling at times that I know I missed some of you and I apologize for that! I spent the past month  repackaging the old ATS-3 rig and building a new "finger tapper" key from some ABS plastic stock in the work shop here.  The key turned out great but the operator definitely cannot send for sour apples with the new key!  What a disaster as many of my friends out there who tried to copy me can attest!  I guess that project will require some more work or a new key design for future Sprints! Many thanks to all of the gang who made this contest a memorable one indeed.  Lots of old faces and some new ones as well.  It looks like QRP is alive and well.  Thanks to ARS for a wonderful evening.  I hope to see all of you folks again next month.

AB9CA
Well I sure enjoyed it from this end - not sure how much fun you guys had digging me out!  Station was an ATS-3 with White Rook paddles and power was 4 AA alkaline cells so power out was maybe 1w at the beginning but it fell as the evening went along. Using the Elecraft dummy load I measured it when the sprint was over and got 0.9w on 80, 0.75 on 40, and 0.68 on 20. So if you pulled me out give yourself a big 'ataboy!  40 was the main band with 15 Q's, then 4 on 20, and 3 on 80. QSB was not too bad and the noise level was fairly low. Most stations were fairly easy copy but I guess they would be since ya'all were a few dB stronger than me. Only actually lost one, WA7OJY, and there I got everything but the state and then he disappeared. Thanks to everyone who stopped by and struggled to hear me. And thanks to the guys who do all the work to put these on. Always fun! See ya' next month!

KO7X
Just got on for a half hour to hand out some QSOs.

N4BP
K3 @ 5W, Sewper Armadillo 40/80 Coax Trap Dipole, N1MM Logger.  Right out of the gate on 40M, Randy, K7TQ, called at about the loudest I've ever heard him.  Further CQs produced nothing and scanning 40M found only Randy calling CQ.  Signals started trickling in shortly and made 37 Qs (including my one DX, NP4KT) before switching to 80M. Loudest on 80M were K4ORD and K4BAI with booming sigs.  Another 11 Qs on 80 made a total of 48, exactly what I had last month!

K4BAI
20M was wide open at the beginning of the Sprint, but few knew it.  40 and 80M were very good with strong signals from all over and skip not too long.  Easily worked AZ, CA, and WA on 40 and best DX was NG7Z in WA on 80M.  Activity is still low and hope that will improve next month.  Thanks for all QSOs.  Especially for three bands from WA9TZE and W5ESE.

W1PID
Operated about a half hour. K4ORD was 10 over S9 here! Best DX was WA9TZE in WI. Thanks to all for the fun.

NI8N
What fun!  Who would have thought you could 'run' with 5 watts.  Worked  1 watt stations over quite a distance.   Lots of GL's and TU's.  Good bunch of guys.

AI3G
Conditions certainly seemed a lot better this month. First time I have heard anyone on 20 meters at night in a long time.   40 Meters seemed pretty good until near the end of the sprint. See everyone next month.

KA8LLE
K-2, 110 ft doublet, 5  watts. Only worked 1 hour, all but 2 contacts on 40, had one on 80, and one on 20. Did not hear much activity on either of those bands. Out of the 12 contacts I had 10 states. Thanks for another fine Spartan Sprint, this was my first in several months and my CW has gotten rusty.

VE3MO
80m was quite noisey last night which was ever so noticable when I removed my headphones after 2 hours of "hash" - "my lord, I've gone deaf!" Anyway, it was a good evening although 40m only gave up 1 contact. I was using my sierra to a windom at 30 feet.

W5ESE
KD1JV AT Sprint 3, Whiterook MK-44 paddles, 9.6V wall wart.My antenna was a 100m Horizontal Loop. 20 meters was fading
fast at the start of the contest, but was able to snatch a couple QSOs before it petered out. The propagation seemed quite good on 40m. The atmospheric noise was pretty high here on 80m, but the band was open. Participation was outstanding! The 32 contacts I was able to complete may be the most I have ever made in this event. It was good to hear many new participants, as well as old friends.

N8WE
No contacts. Was able to copy N5GW, at 1 watt, from ms on my Softrock Lite 40 receiver using the attic dipole. What a really sensitive receiver.

W8YMO
It's Harry, near Cleveland, OH.

AA9KH
All QSOs were on 80 metres at 5 watts output. A li'l more publicity about your events, please. Ops calling "CQ SP" didn't give me ANY clue. Will come up with a better rig before next time.

WA7OJY
K1/88' Doublet @ 30 feet. Nice to have some better condx.  From Southern California I was able to work most regions of the country except the north east states.  AB9CA's 1 watt from Alabama was also workable from here.  NG7Z had a great signal from Washington state.  I'm looking forward to the next one!

K7TQ
Good to get back in a Sprint. Always a good sign when you can make a QSO in the first 30 seconds, especially when it is with N4BP. WA9TZE had a great signal. Noteworthy was N5GW at 1 Watt. Could only get half an hour in, but great time on 40 m. Hope to catch many of you in FYBO this Saturday.

Posted by Richard Fisher, KI6SN at 1:30 PM No comments: