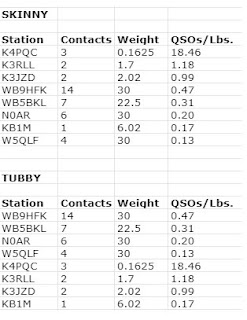 The party must have been moved to 80 meters because there were only Walt, Nick and me heard here on 40m this evening.Someday I need to figure out a way to put up an antenna for 80 on my less-than-postage-stamp-sized lot. Helium balloon? See (hear?) you next month.  72 ... Don

Great weather at 60*F a little rain and overcast.  Before the Spartan Sprint I didn't hear much activity on any of the upper bands and 40 was extremely noisy so I stuck to only the 80 meter band filter.  Even on 80 I didn't hear a lot of activity and only worked 3 stations. A few minutes before the end I called CQ and a ?3X? came back when I I sent a ? my battery died...  either good or bad timing.  Thanks to all who participate.  72