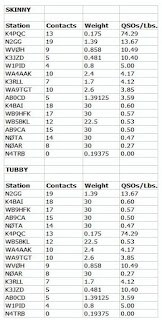 For an enlarged view, please click on the Scoreboard.
Posted by Richard Fisher, KI6SN at 8:42 AM No comments:

My house is in the midst of being painted so all antennas, such that they are, are disconnected and dismantled this week.  But knowing how important the Spartan Sprint is, I spent the weekend resetting up an attic doublet with two homebrew loading coils and coax running through the house. It's a terrible antenna but some wise fellow once said "any antenna is better than no antenna".  And much to my surprise and joy, seven patient and skilled ops heard me this evening.  Even RBN was my friend this evening!  Thanks to all on 40m and to the complete staff of A.R.S. for continuing to facilitate this monthly pleasure.  72/73 ... Don

Celebrating my 50th year as an Amateur Radio (Ham) Operator.

Great weather at 65*F for the Spartan Sprint. Lots of activity for Search and Pounce but only a couple of contacts made calling CQ with only 2W. I did work John - K4BAI on 40 and 80.  Also worked Gil - N2GG in NM for his first Spartan Sprint. A little more weight this time using 2 filters. Thanks to all who participate.  72 - Phil

My inaugural run with my new MTR-4B V2. I used a 650mAh Lipo battery, a Palm paddle and CCrane earbuds running 5W into my 40m Delta Loop at home. I started out on 20m calling away and John, K4BAI return my call but quickly faded. I figured if John’s beam wasn’t making it, that was pretty good indication to head down to 40. I stayed on 40 until about 20 minutes left in the Sprint, handed out 8 QSOs there and switched to 80m and worked Nick, WB5BKL again. As always, thanks to ARS for putting this on and collecting our scores. Much appreciated. 72, Myron, WVØH

80m only, using my just completed purpose-built QCX-Mini transciever.  I was not plagued with a lot of QSB or QRN this month.  It was more very weak signals from the QRP Spartan Sprint players, and not that many participants using 80m.  Maybe 80m will no longer be usable as we get into the warmer months.   I might have to build some more of the single band QCX-Minis.   Naked 80m QCX-Mini w/500 mAH LiPo Battery Pack running at 4w with KØMBT 3D Printed Mini-Mini Key and Earbuds to a bent 107' EFRW up 20'.   73 - Jody - K3JZD

Back on the air now that I have an antenna again! Started on 20 but no activity found. Went to 40 where most of the action was. Logged 11 on 40 and 4 on 80. Good to hear some new calls along with the more familiar ones! Good to see more activity. Rig was IC-7200 @ 5w. Ant was wire. Thanks for the Q's. Hope to be back next month. Dave, AB9CA

Enjoyed contacting so many of my favorite Sprint operators! I learn a lot from observing how these skilled operators manage weak signals with grace. A nice surprise was working Ivin, N9IVI (not officially in the event) who was backpacking in Indiana: actually living the Adventure Radio Society ethos!

This was my first Spartan Sprint. I called CQ SP on-and-off for 1.5 hours on 7.023 MHz without a response or hearing another Spartan Sprint station (in the rather wide passband of my little rig).  Still, my call showed up on pskreporter with the station closest to Atlanta being in Wisconsin, so I'm actually pretty happy!

Bands seemed to be a little better than previous months. All my contacts were on 80 & 40 meters. Equipment used was a IC-705, 100ft CF Zepp Antenna, RF Output power was 5 watts. Enjoyed the Sprint, Thank You! Donnie Garrett / WA9TGT

Running the TS-590 at 5 watts, vertical antenna and dipole. Conditions were improved up here. It hit 85 degs in the Twin Cities and a TS blew up all around me. So 40 minutes of fun then the mad dash to disconnect antennas! 72 to all Scott NØAR

Posted by Richard Fisher, KI6SN at 8:30 AM No comments: