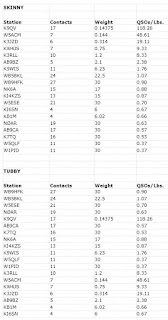 For an enlarged view, please click on the Scoreboard.
Posted by Richard Fisher, KI6SN at 3:56 PM No comments:

K3RLL
Just wasn't getting any answers or getting much attention from RBN for first half-hour and then all of the sudden, someone turned up the signals on 40 meters tonight! RBN started hearing me and great ops started calling. I actually had a mini-pileup once. Amazing! It was great!  It was like having a real, actual, working good antenna or something! (GRIN)  Thanks for the contacts, the good ears and patient ops.  72/73 ... Don

AB9BZ
Fun sprint, ran 1W for 4 of the contacts, good to hear stations active. Thanks for the QSOs 72 de ab9bz

KI4KZS
I caught this sprint on the air and looked it up to find it was QRP! I love operating QRP, so I jumped in to make as many contacts as I could. This was my first time. It was a lot of fun and I hope to catch it again. 73, Brent / KI4KZS

KW4JS
It has been several years since my last Spartan Sprint.  The hiatus was due to the work schedule.  I use to be competitive in the top 10 of the skinny division but alas, I am out of practice,  Worked only S&P with my weak signal and crummy antenna.  Thanks to everyone who pulled me out of the static and QRM.  I had great fun.

K9WIS
Antenna was 40M dipole up 8 feet strung between 2 bean poles in the back yard. Weather on the patio was warm . . . no mosquitos yet. Won't be so lucky next month. It’s been a long, long time since I’ve been in Spartan Sprint. A fun casual contest. Found my original ARS member certificate No.80 back when I was AE9K. Brian, K9WIS

KI6SN
What an exciting evening from out here on the Left Coast. Lots of signals on 40-meters. It was fun hearing the band get longer and longer from SoCal as the Sun went down. Many thanks to K7PD, K7TQ, NK6A and WB5BKL for pulling my signal from the QRN. Heard but not worked were WB9HFK, K4BAI and W5ACM. It was so nice to finally work Nick, WB5BKL, after so many years. Our first SP contact! Hope to see everyone next month – Monday evening, July 6. 73, 72, Richard, KI6SN, Riverside, CA

NØAR
Ran the TS590 at 5 watts tonight. Vertical antennas and RX loop. All contacts on 20 and 40 meters. TS action so some QRN but 91 degs is a good trade off to snow! Had a VE call me with QRO, he had never run QRP and wasn't sure his rig would do it. So I told him what I was running and he came back and cranked it down to 5 watts. I was his first QRP contact ever! So the bug has bitten him and he's been directed to the web site and invited back to join in. Good fun all around!

AB9CA
K3 at 5w to Inv Vee. Started on 20 and was surprised to work 6 stns there - 4 TX plus CA and ID. Moved to 40 and picked up 11 from IL KY GA FL VA AL NH TN. Went to 80 and heard someone trying but could not get enough to copy. Sorry for that. Heard no one else there. I don't think there were any 2 banders tonight. Thanks for the Qs! Hope to hear everyone plus more next month. Dave ab9ca

W1PID
It was so great to see so much activity and so many old friends. 20 meters was tops. NK6A in CA. K7TQ in ID. WVØH in CO. Thanks, guys, for all the QSOs. Jim W1PID

NK6A
Band conditions were much improved this month.  I started calling CQ on 20M and received a call from ZL2IFB.He was QRO but I mention this because I worked him off the back of the beam at 5W. Worked into NH twice and the usual bunch of Texans.  40M was quiet here and grabbed a few more stations.  Don Minkoff, NK6A

KB1M
Had completely forgot about Spartan Sprint until 9:15 PM , and then could not really get into it. 73, Walt, KB1M

K7TQ
I operated the Sprint using my mobile rig sitting at the top of the Lewiston Grade in Nez Perce county Idaho.  There is a 2,500 foot drop to the east and south which makes for great terrain enhancement.  Two farthest QSOs were with W1PID in NH and XE1ZYZ in Mexico.  Twenty meters was productive for about half an hour then 40 was the band to be on.  Hope to catch many of you again next month.

W5ESE
I was late getting to the shack this month, so just fired up the big rig. Good participation this month and fair conditions. Was great to work neighbor WB5BKL on 3 wavelengths. Pleased to meet some new entrants; Welcome!

K9QV
Finally dusted off the rig and got on the air again!  I was surprised how much activity I heard on 20m.  About 70% contacts on 20m, 30% on 40m and only one on 80m.  Battery was dead 10 minutes from the end. Time to replace it. The Sprint was a great time, just like I remember. Thanks to everyone.  de Drew.

W5ACM
It was fun to make some 20M contacts this month, but the QSB was difficult. All of my contacts were on 20M or 40M. There were the usual suspects, but a few new folks in there! I was glad to hear good ops on 20M. It looks like things will be improving for the summer months! Although my ATS-3A can’t do 15M, it is quite effective on 20M. I am getting a bit skeptical on the longevity of my elderly 130 mAh Lipo batteries.  I will watch them closely over the next few months. Sorry about the somewhat difficult CW on my end, but I tend to forget to burnish the copper contacts on the homebrew keyer paddles. 72, de Andy W5ACM, Houston, Texas.

x
Posted by Richard Fisher, KI6SN at 3:50 PM No comments: