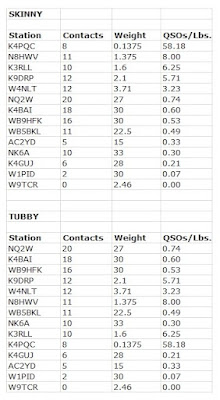 For an enlarged view, please click on the Scoreboard.
Posted by Richard Fisher, KI6SN at 11:00 AM No comments:

6 states: (GA, NJ, NH, GA, NY, IL). All Tube HB Tx: 15.8 lb; R-75 Rx: 6.8 lb; Peripherals (matcher, key, antenna switch):5.4 lb) = 28 lbs. My first Spartan Sprint. Was on 7030 QRP calling frequency for two hours. Did great for an hour - CQ SP and all responses were Spartan Sprint QRP folks. Frustrated by a 45 minute reg chew by two powerhouses on nearby frequency who saturated my receiver during the second hour. Ordered a 3560 Khz FT 243 crystal last night so next month I can band hop 80 to 40 to 20.  My all tube home brew is a 6AG7 xtal oscillator driving a 6L6 final. The xtal oscillator output is resistor loaded and the final grid bias is adjusted so that a 3 db pad on the tx output makes me fully QRP at just under 5 watts. Lots of fun for this old-timer. See you next month. Dick Barnett, K4GUJ, Spotsylvania, VA

So nice to have 20m open this evening and some nice signals rolling in. First call came from NK6A Don in CA! Even RBN gave occasional good reports. The party seemed to wrap up about 01:30z so tried to follow the crowd down to 40m but few showed up. Got only one double as 40m was a muddy field, at least from here. How bad was it?  Well on 40m, RBN never heard my whopping 4 watts. Hats off to VE3NRT with good signal from ONT with ONE WATT! That's impressive. This was one of the more enjoyable SPs with conditions that made contacts a lot easier to make tonight.  ARS must have made a $ contribution to the ionosphere.  Thank you.  ... 72/73 ... Don

Lots of static on my efhw in WI. Went with the MTR4B again with the 8 AA’s and an Adventure Paddle. Nice light weight combo. K4BAI- I didn’t count our 40m dupe. Was really getting hard to hear by that time. Always Fun. 73, Nate

Not sure if I've done an SP before; if so, it's been quite a while since ... stumbled on a CQ SP while looking for Lewis and Clark Trail stations! Looked it up on WA7BNM Contest Calendar, and caught the last 45 minutes or so ... Recognized a few callsigns including WB9HFK and K4BAI, although I was a little too late to work John (K4BAI) ... Got distracted in final minutes checking 20m for SP activity ... worked ES3AX (Estonia) on 20m (first call using 5w; he heard me better than most stateside SP stations did!), and got back to 40m right at 11pm to just miss John's final CQ.  Bummer. But fun!  I'll try to do this more often!  Rig:  Hermes Lite 2 (rig-in-a-box at base of antenna controlled via WiFi), Quisk s/w transceiver, 1/4-wave fan vertical with 32 radials. Thanks! - Ben, AC2YD

I engaged my SW-3B for the sprint, so no 80 meters for me (after last month I wasn't too concerned). 4 QSOs on 20 and 8 on 40. I worked WB5BKL on both bands; Nick has the ears and patience to dig out the sigs from the noise.  I think I worked AC2YD and N8HWV for the first time tonight; thanks guys!  And thanks to all for the QSOs. 73, Don, K9DRP

Another month with zero contacts but I was there pounding the Key .  Yesterday was the 87 Anniversary of D-Day so I fired up the 4SQRP Group "Bayou Jumper" I built. It is their recreation of the WW2 "Paraset" that helped win the war.    This was the first time with it on the air so maybe next time there will be fewer operator problems but had fun regardless...  Will see you next month, 73 Tim W9TCR

I started a few minutes late and didn't hear anything on 40 meters and then changed the band filter to 80 meters and looked up and down the band...  then looked at the calendar to make sure that the date was correct. Then went to 20 meters and found the water hole. The weather is warm here at 80-degrees F, clear and found fairly quiet band conditions... too quiet. The Rig is a modified Steve Weber - KD1JV  AT Sprint III,  lightened earphone, paddles and a 200 ma 3 cell LiPo battery. 72/73 to all and thanks for the QSOs, see you next month.