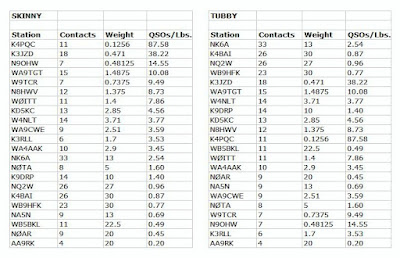 For an enlarged view, please click on the Scoreboard.
Posted by Richard Fisher, KI6SN at 7:35 AM No comments: 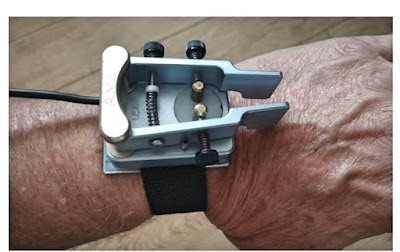 Tough to copy with the lightning crashes - Thanks for the Q's. QCX, Doublet, GenLog.

Nice to see 20m open this evening but the grey line seemed to shift west pretty quickly.  So, it was back to the workhorse 40m where only two stations could hear the booming signal from my wet string antenna. But it was still fun and look forward to next month. My thanks to the entire staff of A.R.S.   72/73 ... Don

I promised myself when I retired I would try to do the sprint more often.  This time I wanted to try out the new Icom IC-705.  So I started planning on it Sunday afternoon.  I wanted to really use it “portable”.  I was out in the garden, radio on the stock battery, my usual Wrist-Key.  Antenna was a 75-ft Random wire with 2 X 33-ft counterpoise wires laid on the roof, and the wire was stretched over to the mast that supports my dipole. This is not a normal antenna here.  Tuner was the Icom AH-705 remote tuner laid up on the roof at the antenna base, and coax to the table in the garden. I started on 15m calling CQ.  I got one contact.  Believe it or not, Texas.  After 10 minutes calling and only one contact, I ran the VFO up and down a bit, and there was nothing else out there.  So about 15 min into the sprint I went to 20m.  20m was the money-band.  I caught NK6A with a crushing signal out of CA.  And that was the majority of contacts, 6 CA and 4 TX.  I tried 40m, then I did something different, I went back to 20m, then 80m, then back to 40m and I ended the last 5 minutes back on 20m.  With just seconds left I catch a weak CQ-SP out of NY for lucky 13.

I heard a couple calling that I was not able to copy.  Sorry.  Not sure if it was conditions or my choice of antenna/equipment. Not bad on a new radio. Nice to catch some remembered calls.  Thanks for a fun two hours. Next month I’ll be DL/KD5KC, watch for me on SOTA or POTA.

Started a little slow on 20 meters and made 2 contacts with DX with NK6A in CA.  This is the first time in a long time that I put the rig on 20 meters.  Not too many signals on 20 meters so I went to 40 and worked 9 more.  After 0200z the band started to dry up and I called CQ and worked my last contact with WA9CWE in IN.  The lowest station by far was John - K4BAI in Columbus, GA. The weather is warm here at 75*F with storms close enough to cause static crashes. The Rig is a modified Steve Weber - KD1JV  AT Sprint III,  lightened earphone, paddles and a 200 ma 3 cell LiPo battery. 72/73 to all and thanks for the QSOs, see you next month.

Had a half hour to play in the sprint tonight so I fired up the K2. I forget how nice an analog rig can sound. Spent some time on 20 meters and then it went away, moved up to 40 and worked another handful of stations. Best signal report goes to N5GW, the pipeline was sure open to MN! Sure is nice to have propagation again. 72 Scott NØAR

Great conditions on 40.  Stations were booming in S8 and S9. I only had an hour but it was a great time.

Rechecked my stations weight once again, and it’s total weight is accurate at 23.8 oz, including KX2, battery, key, key cable and earbuds. Again I used KX2, and my 80~10 meter EFHW wire antenna. Band conditions tonight were very noisy with storms looming about 100+ miles west of my location. I stayed on for the full 2 hours tonight despite the higher QRN background noise. Stayed on 40 meters biggest part of first hour, then switched to 80 meters, found virtually no activity on 80 meters, that seemed strange! Changed to 20 meters, made one contact on 20 meters and then returned back to 40 meters. 40 meters seemed like where most of the activity was for this months sprint. Donnie Garrett / WA9TGT

Nice to log some 20 meter contacts this month, but 80 meters was unworkable.  I witnessed an Indiana station working the SP take over the frequency from 3 different OPS after answering their CQ. After getting over my aggravation at his rude behavior, I realized that many sprints operate in such a manner whereas the answering station is awarded the frequency.  Perhaps he wasn't rude but just unaware of the modus operandi for SP. 73, Don, K9DRP

40m Only.  Extremely active evening.  It ate my small battery in an hour and shut me down - must have used too many milliamp hours sending pleasantries - will skip them next time in order to conserve my small battery - so don't be offended !!  Used my new purpose built 40m QCX Mini, small 500mAH LiPo battery pack, small 3D printed straight key, and ear buds.   73 - Jody - K3JZD

No shortage of QRN here in the sunny south! Thanks for pulling me out of the noise! 72, Evan WA4AAK Alabama

Local storms brought really loud QRN here, especially at the beginning of the Sprint.  I had to try 3 different radios to get one that let me make QSO’s.  I settled on a QCX to an inverted vee at 32 feet. Thanks to everyone who worked me: great fun and great ops! 72 de Gary WØITT

Worked 3 on 20M and 6 on 40M in the last hour.  Good to work fellow NM Bruce AA5B, about 75 mi. north of me.  Usually a dead zone. Worked NM, GA, CA, OR, IN, IL, OH and MO, pretty much coast-to-coast coverage. Used Ten Tec Scout and McElroy bug (heaviest part of the station). Signals fairly decent for the most part.  Always fun as usual.

After being shut out with zero contacts last month due to self inflected equipment and operator problems; I had a better plan this month.  I started out with the 4SQRP Cricket  40 at .8 watts and after 30 minutes of no luck I went to the backup plan.  Powered up the QRP Labs QCX - Mini, 5 watts @ .7 lbs and ended up with seven contacts. Still had some self-inflicted problems this month; so next month I'm bringing back the 4SQRP 40.  Going with a higher voltage lipo battery pack to bring power up to 1.5 watts @ .3 lbs. will see how it goes..  The Spartan Sprint is great fun and only takes a few hours; it is a lot of fun, see you next month...... 73  Tim W9TCR

MTR-3B with N6ARA TinyPaddle Jack (highly recommended) and a NiMH 280 mAH 9V battery for about 2 Watts out.  Antenna was a Buddipole without the need for any further antenna tuner.  QTH was Mountain View, CA, in Silicon Valley. Made all 7 QSOs on 20m: NQ2W, KD5KC, W6LD,  N5EM, WB5BLK, NA5N, and VE6WMS.  Heard N7CQR and NA5N on 40m, but they didn't hear me.  My RBN spots on 40m were all local, so 40m hadn't really gone long from California by contest end.  Strongest signal was W6LD (a local running 1 Watt, up the road a piece) and NQ2W running 5W in New York.  Good to see the bands improving, even if today's event was in a bit of a trough.  Looking forward to making SP QSOs on 15m in the coming months.  73 de N9OHW

Had a great time again (my second Sprint).  Made more contacts than last month, so that’s a good thing.  80 meters was completely dead here, so I depended upon 40, and a number of you helped me out.  I actually made 9 contacts in 9 States!  I look forward to next month.  73, Steve, WA9CWE 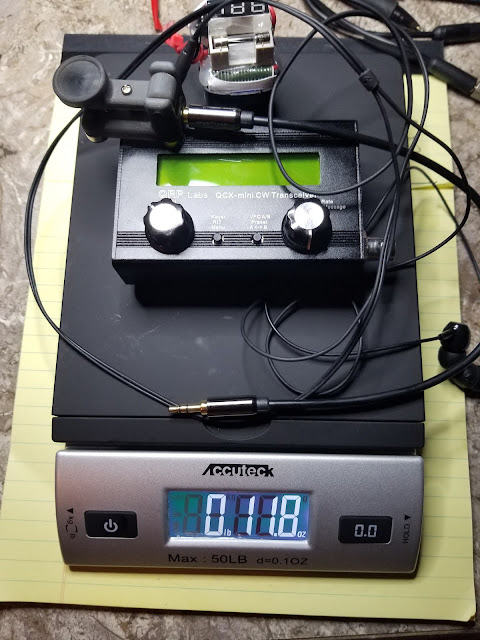 Posted by Richard Fisher, KI6SN at 7:32 AM No comments: