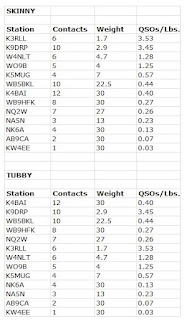 For an enlarged view, please click on the image.
Posted by Richard Fisher, KI6SN at 3:41 PM No comments:

Heard a few others on 40M, but they couldn't hear me. Running S5-6 noise here for some reason. Couldn't raise anyone on 80M. 72, Paul NA5N (Editor's note: The Adventure Radio Society is a staunch supporter of NA5N's annual Zombie Shuffle. Details: http://www.zianet.com/qrp/ZOMBIE/pg.htm )

Signals were weak tonight on 40m but at least the noise level seemed almost absent.  Hmm, did I hook up my antenna? RBN spots were weak too.  Yes, I'm sure I reconnected my wet string HOA antenna. Nice mix of long time radio friends and some new good ops this evening. Sure made for a nice hour on the December Spartan Sprint - 72, Don, K3RLL

This is my first SP entry.  I have played in the event several times, but never sent in an entry.  Feels good to finally complete the paperwork.  We operate a small net on Monday nights at 8:00 PM local time called the Slow Speed QSO Net.  It is intended to encourage CW operations for those that are a bit on the rusty side.  We have used the Spartan Sprint as a way to give them experience with a CW contest format.  So if the entrants have seen WI entrants more than usual, that might be the reason.  Regardless, I've enjoyed the event and look forward to the first Monday every month. Vy 72, MJ, WO9B

Bands were long tonight!  Hooked up the HB-1B for a lite weight station.  The mini key caused me some trouble; RBN listed me as K9DAEP a couple times!  Not a lot of activity this evening, but I was able to work both coasts. It helps when you and the calling station (NK6A) know what the other's exchange will be. Yet I couldn't get thru to my neighbor, WB9HFK. Gud to work some new calls tonight!  72, Don

Kx3 @ 5w into a ZS6BKW inverted Vee oriented N/S at 40 feet. My struggle this evening, so very special thanks to Dave/AB9CA, on/K9DRP, onnie/W9TGT, and Don/K3RLL for tonight's log. 20m was totally dead for the sprint on my end tonight - not really surprised. 40m was nothing to brag about, and it just died out after I worked Dave at 0256 UTC. In the next 15 minutes I heard four or five stations calling that were trying to get thru but couldn't pull them out. Thanks to all, take care and stay safe,  72, Cray / K5MUG / San Antonio, TX

This one was a challenge...Started on 20 meters, nothing. Only 1 completed QSO on 40 meters. WO9B and WA9TGT answered my CQ but I couldn't hear them after my exchange. After the Sprint, I did spot searches on fellow Spartan Sprinters on the RBN. From those searches, I have concluded that 40 meter propagation wasn't that great during the Sprint AND I have to make improvements in my 40 meter antenna system - the delta loops just aren't performing, as expected. My 40 meter RBN spots are fewer and weaker than other Spartan Sprinters - Excelsior! 80 meters was a little noisy but was good for 6 QSOs. I'm happy to say that I was able to put WO9B and WA9TGT in the log. Thank you all for the opportunity. Merry Christmas and Happy New Year! Hope to hear you in 2022, Will, NQ2W

Only activity was on 80M although there was some propagation on 40M. Tried a few CQs there but no response. Good to see some of the usual suspects. - 72.

Slim pickin's. I'm out in AZ. Worked only 2, both in TX. Heard NK6A but did not complete. Maybe next month will be better. 73, Dave

This was my first attempt at operating QRP. I was a bit disappointed in the lack of stations that I heard. WB9HFK was the only station I heard calling CQ near the QRP frequencies on 80 meters. I also listened on 40 meters near 7030 and 7112 kHz. No on heard there. I tried calling CQ on 80 for about 10 minutes, but no call backs. I'll try another one, but this one was too quiet for me. 73, Kevin Alt

Posted by Richard Fisher, KI6SN at 3:37 PM No comments: