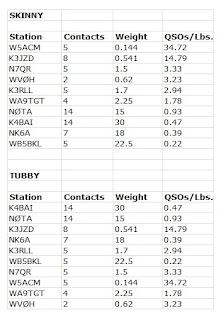 For an enlarged view, please click on the Scoreboard.
Posted by Richard Fisher, KI6SN at 8:28 AM No comments:

Not many Sprinters on 40m this evening but at least those of us there could space ourselves out easily. (But that's not usually a good sign; is it?)  40m was really up and down here in FL and very strong into New England tonight Big signal was KB1M - a nice change after months of barely copying each other.  72 and thanks for the contacts ... Don

Thunderstorms in GA tonight and QRN very bad on 40 and 80 Worked only VE3EDX on 20, 12 stations including NK6A in CA on 40, and AB9CA on both 40 and 80.  Hope for better conditions next month. Now that we are into summer like conditions, it will pay to start on 20M.

I used my usual MTR4B-v2 but decided to exclude my Palm Paddle and larger battery (if you can call my 650mAh LiPo a ‘larger’ battery). I used an 1/8-inch stereo plug for my paddles. I rigged a wooden paddle to it from a hamburger skewer and bent the contacts of the plug to allow for single-lever iambic keying. Very fun to have the rig positioned sideways in front of me.

Here is the run down.

Output power: 3W at start and 0W at 1 hour into SP; battery died.

Three contacts on 20, the rest on 40m. Used a QCX for both bands, which caused me to miss some weaker callers. Quite a bit of static crashes on 40m making things tough. Tried 80m but no luck. Vertical on 20, doublet on 40.

I haven't done this one in a while.  KX3 dialed down to 5 Watts with a modified QRPGuys paddle into a Buddistik on my sister's 4th floor balcony railing in Park Ridge, IL.  Stayed on 40.  Heard no SpartanSprint contesters but a lot of stations on the air.  No answers to my half dozen CQs. A lot of fun and easier than at home in Portland OR. - Russ

Using my KX2 with outboard 12V LifePo4 battery. Antenna 100’ cfzepp. I heard very few stations calling CQ SP, all 4 of my contacts were on 40 meters. Band was very noisy due to storm cell passing through.Hope next month will be better. - Donnie Garrett / WA9TGT

Fun times on 20M and 40M this month. I spent the first 25 minutes of the event prepping the ATS3a. It has been a few months since I last used it. With new batteries and somewhat clean key contacts, it did well. The new vertical is also a great help. Looking forward to more 20M ops next time! - 72 de Andy W5ACM, Houston, Texas.

Posted by Richard Fisher, KI6SN at 8:00 AM No comments: