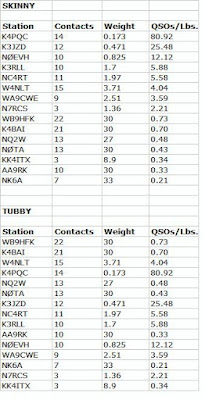 For an enlarged view, please click on the Scoreboard.
Posted by Richard Fisher, KI6SN at 4:24 PM No comments:

QRZ Propagation looked pretty dire for this evening and 20m was weak but skip was VERY long. Had trouble being heard stateside but strong into Europe and Africa. Where's the DX when you're looking for some? 40m was a lot hotter with good, strong signals despite the propagation forecast.  Like taking the Harley out on a cloudy; sometimes it pays to ignore the signs. Thanks to NØTA for 2fer and K4PQC's 2 watts was booming into PA tonight. What fun! 72/73, Don K3RLL

Station Weight: 30 pounds (IC-7300, Samlex power supply, MFJ 993B tuner, Ten Tec electronic keyer and iambic paddles, and a partridge in a pear tree, feeding the 40 meter doublet in my yard) I thought about going out with the QRP gear tonight, but now it's dark before 7 P.M. here, and after I got the kids to bed, I would have had to go out to a park, put a wire antenna in a tree in the dark, and operate by lantern light, and I opted for my shack instead. These were the best 40 meter conditions for a Spartan Sprint I can ever recall. Stations were loud and clear, and there was a lot of activity. I made contacts as slow as 12 WPM and as fast as 20 WPM. 80 meters and 20 meters weren't exciting. Thanks for the QSOs, all. 73, Michael AA9RK

Same score as last month. This month, however, I worked a couple QRO stations that aren't counted in the 13. Only QSOs on 20 and 40. One 2-bander with NØEHV. Nothing heard on 80. I put up a new tribander last week - a Mosley TA-33-JR-N at a whopping 32 feet! Seems to do better than the mini-beam, like it should. Thanks for the contacts and for the opportunity to participate. 72, Will, NQ2W

Twenty worked OK and 40 the best. My antenna poor on 80 so never heard anyone.  It was fun to play in the skinny division again. Been away for few years. Thanks for the event. Will improve station here and give it another go. - John NØEVH

Most action on 40M. Things petered out on 20M and 80M was empty. Was a busy week with SKCC Sprint, SKCC QSO Party and the Peanut Power Sprint which I operated QRP in all events. Still surprised what 5 W will do, There were several under 5W operators in the SP that seemed to do OK. Hope to get a few days quiet to give the one good ear a rest, but I hear some oinking in the background. 72 and thanks for the QSOs.

Operated on 40m only as there was no 20m activity heard from my SFL QTH. 40M was quite noisy but had activity. I had brief Qs with K4BAI and K4PQC. Also made contact with Nelson, CM6SQ in Cuba, although QSB was quite severe. Rig was QCX-mini to an 80-10m EFHW up about 35 feet in a sloping horizontal L configuration. Key was a CW Morse. Battery was Bioenno 12V 3Ah. Went QRT after ab0ut 90 minutes.

All of my QSOs were on 40m. It seemed like 40m was doing pretty good considering that the event took place during the peak of a G2 Magnetic Storm.   Purpose built 40m QCX Mini, small 500mAH LiPo battery pack, small 3D printed key, and ear buds. 40m Dipole at 25'. 73 - Jody - K3JZD

Certainly more activity this month I'm sure as a result of more advertising.  A continuation of last month's quest for lighter weight and a little more power.  On the day of the sprint I received a package from Amazon that I had ordered a few days before.  In the September's SP I used a 9v ANVOW battery that is actually a 3.7 V Li-ion battery with a battery boost module. I was able to operate almost 1 1/2 hours at one watt and was looking to see if I could modify the module to put out a little more voltage at the expense of time.  Then I found a USB charging module on Amazon that is exactly what I was looking for....  a boost that is adjustable from 5 to 12 V.  The only problem is that the only single cell battery that I have is quite large and I didn't want to dismantle the ANVOW battery supply.  That supply didn't last 2 hours and if I used that battery at a higher drain it might not last one hour.   I needed a battery that would supply a little more voltage as well as last for up to 2 hours. This  module is said to provide up to 2 amps which is far more than I need to power the Steve Weber - KD1JV  AT Sprint III.  So, for this month, my station weighs in at a ridiculously high weight of 78 1/2 grams with a power supply weighing almost 34 g.  Does the battery boost make noise?  Well, I didn't hear any.  It is amazing that an increase in power makes this much difference.  Just 1 1/2 volt increase almost doubles the power output to slightly more than 2 watts which makes a big difference in the number of Qs.  Next month the station weight should be a little lighter at the same power level.  For October I used three band filter modules (20, 40 & 80 although I didn't make any contacts on 20 I included its weight)  plus a much heavier power supply. 72/73 & thanks for the Qs & I will look for you next month. Phil K4PQC

Another good time at the Sprint. Didn’t hear folks that I had worked in the past, but did make a few new friends, all on 40 meters and a total of 7 States  Looking forward to next month with the hope of making some contacts on 20.  Station is a Xiegu X5105 with straight key and G5RV at 20 feet.  73, Steve, WA9CWE

Kinda quiet here this time around and only had a short time to operate too. John, KK4ITX

Posted by Richard Fisher, KI6SN at 4:10 PM No comments: