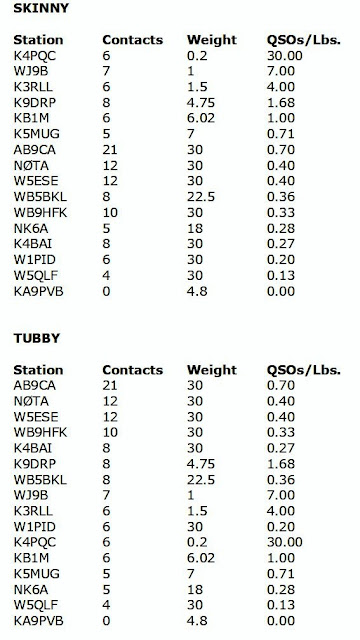 40m was awfully quiet this evening. Signals were not loud here into rural PA but little background noise and no QRM so it was fun. Thank you ARS. Maybe it's time we start a GoFundMe page for sunspots.  Whatsa?  72/73 … Don

I had to wait until a line of thunderstorms had passed thru San Antonio before hooking up the antenna at 0130Z. The noise level wasn't that high on 40 meters but there were not many stations heard. WB9HFK had a remarkable lack of QSB on his signal and was the only consistent signal I heard for over 45 minutes on 40m. Worked NØTA, WB9HFK & K4PQC on 40 meters and AB9CA on 80 meters.

QTH: GA. QSOs by band: 40M: 6; 80M: 2. Lost the first one hourand 25 minutes to a power outage after an afternoon thunderstorm that brought down trees, power poles and lines. Had thought of using the car battery and sitting in the car in the garage and using the regular station antennas and a flashlight, but we decided to visit our daughter and her family a few blocks away where they did have power. Watched the Atlanta Braves lose badly to the New York Mets. Very thankful electricity came back on and gave us back air conditioning, ham rig, computers, TV, and outside safety lights. We have a battery back up for the burglar alarm, so never lost that. Thanks for all QSOs.  73/72, John, K4BAI.

Four contacts, nØta on 20m, plus three contacts on 40m (NØTA, NK6A, K4BAI). Elecraft KX-1 internal batteries and tuner, 1 watt measured output. Weight: one pound with batteries, ear buds, palm key. I used an 80m inverted V, apex at 80 feet fed with twinlead. I heard several others who could not copy my 1 watt signal. BTW, I purchased the kit to put 80 meters into the KX-1. Two months in a row, maybe I will remember: first Monday of the month!  73, Will, WJ9B

Using a KX3 at 5w into 20/40m fan dipole at 40 ft, installed N/S. Thunderstorm let up at my location (San Antonio) about 5 minutes or so before Sprint time letting me start up front, for what it was worth. Started on 20m with no stations heard, moved to 40m about 30 minutes in. Tagged AB9CA at 0136Z, with WB9HFK, K4BAI, N4SO, and K7PD following. Squeezed K7PD in the last minutes – thanks for your perseverance and patience. Tough night, heard a few that couldn’t hear or read my sig, lot of weak sigs and QSB, many repeats. Station of note:  K4BAI / John booming in at 599 plus from GA. Another enjoyable event, take care and 72, Cray / K5MUG / San Antonio, TX

Conditions weren't great, but it was much better than the July sprint. Used the Omni VI and a 300' horizontal loop.

Station weight: 90.70 grams = 3.2 oz. = 0.20 lbs.Terrible storms here in GA mostly from hurricane Isaias. Not so much the winds but lightning crashes that made making contacts very difficult. After moving to Bishop, GA this is my first Spartan Sprint in almost 4 years from my new QTH. 5 contacts on 40 meters and one on 80.  Rig: ATS 3B homemade PCB case and paddles <3 w using an 11.1 V LiPo 500 mah battery.  Ant: 160 meter loop @ 25'  Maybe next month will be a little quieter.

Ran the IC-7200 at 5w to wires. Was a few min late getting started. 20 did not seem to have many on. Worked 2 from TX and 1 from CA. Moved to 40 which was the main band of the evening. Logged 11 there - NC NH AL CO PA VA TX. Then went to 80 and found a few more: NH TX IL GA MO. Thanks to WB5BKL for 3 bands, W5ESE and W1PID for 2. It was a fun evening. Of course we could always use a few more participating. Maybe business will pick up if the sunspots return. 73, Dave, AB9CA