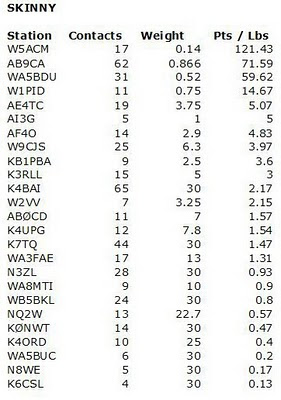 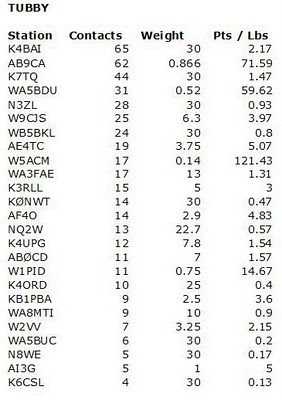 For an enlarged view, click on the images.
Posted by Richard Fisher, KI6SN at 9:12 AM No comments:

K3RLL
FT817 to G5RVjr - Nice to hear some really, really strong QRP signals tonight on 40 meters for the Sprint.  Thanks to those who pulled me out of the noise tonight.

W2VV
FT-817ND @ 5W into an 80 foot zip-cord dipole at 50 feet. I was backyard portable in Ohio, visiting family for the 4th. I got a late start but managed to make seven contacts on 40m and 80m. 80m was very noisy here but 40m was much better.  Thanks everyone for another fun sprint.

ABØCD
Rough conditions, but nice challenge for me. Of course, I was fired up for the first summer 20 meter foxhunt and was wondering why I wasn't hearing KT5E or N0UR when it dawned on me it was Spartan Sprint night and the fox hunt was set for Tuesday! 3Qs on 20 and 8Qs on 40. Elecraft K-2 into homebrew 88-foot doublet at 25-feet fed with 300 ohm twin-lead/LDG 4:1 balun.

W5ACM
Band conditions were quite reasonable for the sprint this month. All of the QRN from the stormsaround Houston was gone by 8PM, and although the QSB on 20M was a bit difficult, I still got five contacts before moving down to 40M. The ATS-3A continues to perform well. The two 200-maH LiPo's were charged just before the start time, and held up with no problems, even with a fair amount of CQ ops. There was no need to move to 80M, and I noticed that several stations on 40M were quite active right up to the end. With the exception of a QRO station on 7040 that never ID'ed, and appeared to be testing/tuning an amplifier, it was an excellent Spartan Sprint!

WA3FAE
A little more challenging than Field Day, the noise level was higher and QSB was more prevalent.  Everybody seemed to roll down to the next band at the same time.  Must have been lousy conditions at their location too!  Good time and good perseverance by all operators to make the contact.

K4BAI
FT1000MP, 5W, zepp, dipole, inverted vee.  Activity much better this month. 20M was good for the first half hour.  40M was excellent.  80M had high QRN, but still made QSOs as far away as PA and IL.  Hope to work many of you in IARU HF contest this weekend as W4AN from the QTH of W8JI.

AB9CA
Rig was ATS-3 at 3w with 8 pack of AA NiMH for power. One pack lasted the whole sprint but they did seem to be getting tired near the end. 20 seemed in good shape - 26 q's there. The band was maybe a bit long with q's from CA, NV, DE, 3 from ON, MA, ME and some other longish ones. 40 seemed to have decent prop - 30 q's - but the noise was pretty bad. Did not find much activity on 80, only 6 q's there. Worked WA8ZBT on 3 bands, think he was the only 3 bander tonight. Worked W2SH, WA3FAE, K4BAI, AF4O, W5ACM, WB5BKL, NQ2W, K4ORD, W9CJS, AE4TC, W4VHH, and maybe one or two others that I have overlooked, on 2 bands. There seemed to be more activity than I've heard for a while. Good to hear so many familiar calls and especially good to hear some new ones in there. If you are new, welcome, and hope to hear you lots more. As always - thanks go to the guys who do the work to make these fun evenings possible!

WA5BDU
Fun!  This was my second or third Spartan Sprint.  I slimmed down a little by making a paper clip and bottle cap paddle and a battery bank of three small LiPo cells in a box.  Rig is an ATS-3.  My exchange was RST - AR - 5W. QSOs came about 50/50 on 20 and 40 meters.  A fair amount of QRN on 40, otherwise conditions were OK.

K4UPG
My first attempt at the SP. Always wanted to play but being antenna restricted and having a church mission team meeting on the first Monday  each month normally restrict my chances. Took advantage of the 4th of July day off to get an antenna up temporarily and give it a go. Wish I could play more and use a real antenna instead of a portable low NVIS type sky hook. Enjoyed the challenge!

N3ZL
Fun two hours, brought back memories of operating in some spartan sprints a few years ago before I was ready to operate in full blown cw contests. Seemed to me as if everyone was staying on 40m and not moving to 80m, but maybe I just missed them when I took a quick break to work a few DX stations on 20m.

AI3G
KX-1 at 3 watts, antenna end fed wire indoors.   Had fun again with QRP.   Thanks to K4BAI for his patience with my signal.

WA8MTI
This time conditions were much improved.  The FT817nd, T1 tuner and LDG 4:1 balun fed my 80m doublet on 80, 40 and 20. I used a 7AH battery for 5 watts.  Think next month I'll just use the internal batteries and try 1 or 2.5w and get the weight down to 3lbs 12.5oz. Thanks to all who worked me and my rusty fist.  Was using a newAmerican Morse Iambic key and after using a paddle for 40+ years, I just couldn't get the hang of it.

W1PID
I ran a DSW40 with 2 watts to an OCF dipole for about 20 minutes. Later I went on 20 meters with the tubby rig just for fun and to see how 20 was. I made 5 more QSOs, but didn't add them to my score. Thanks all. CU next month.

AF4O
My first Spartan Sprint. I have a place not far from my house on the edge of town behind an unused building at the edge of a long field. Ive been there several times for portable operation where going to the parks was not feasible. I wondered how long it would be before i got a visit from the PD. This time it happened. He said he was just checking out the vehicle. I told him what i was doing and showed him my HB-1A. He asked how far i had talked so far. I asked if i was harming anything and he did not mind at all, even saying he was sorry he bothered me. Of course i said he wasn't bothering me. I guess they have to check on nuts sitting in the back of their trucks behind abandoned buildings near dark :-). Antenna was a long wire about 65' with a approx 30 ground wire and L tuner. A short video on my youtube channel (plantopguy5) soon.

NQ2W
Started out on 10 meters - listened and called - nothing. Went to 15 meters - listened and called - nothing. Went to 20 meters and made 5 Q's. Down to 40 meters and made 8 more. New rig and antennas out in the weather make a big difference - 40/20-meter inverted vee/fan at 40 feet and 2-element phased 10-meter quad at 25 feet on roof mounted, 8-foot, homebrew quad tower - see FD '10 soapbox for picture. Cool set-up but I'm not completely satisfied, yet. Stay tuned as I'm thinking about some improvements...Thanks for hearing me and thanks to everyone that helps make this Sprint possible.

AE4TC
Had a great time. Was able to reduce my station weight this month with a smaller power supply  and improved the number of contacts this Sprint. 19 total Q's, 3 on 20 and the rest on 40m with 12 different states. I was using a FT817, 5w into a Hustler vertical. Thanks!

W9CJS
80 M sounded dead but opened up an hour into the sprint. 40M was hopping the entire 2 hours.  I use my IC-703 @ 5w.  I'm amazed that some of the stations were running near 1 watt and I could hear them and work them.    Like most ops I also have a 100 watt transceiver but there's something about the challenge of QRP that I enjoy.

Posted by Richard Fisher, KI6SN at 9:02 AM No comments: