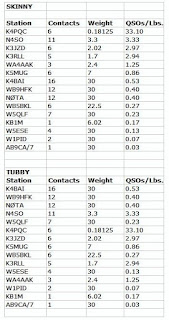 For an enlarged view please click on the Scoreboard.
Posted by Richard Fisher, KI6SN at 3:16 PM No comments:

Well, things were really looking up on 40 meters this evening with the best RBN spots I've had from my antenna-challenged HOA QTH in a while. Not real sure where all the Sprinters were, however.  Someday got to build something for 80 meters. I'm sure my HOA won't mind a nice 80m dipole stretched across four of my neighbor's homes. Anyhow, I'll bet 80m was where the party was tonight.  Many thanks for the five skilled ops with good ears this evening. 72/73 ... Don FL

I only heard two stations on 40 meters: K3RLL, Michael in FL AND N3FCS, Ron in PA.  Most of the clan had already moved to 80 meters where I met old friends:  K4BAI, John; NØTA, John; WB9HFK, Mark; N4SO Charles; and

my local friend here in San Antonio W5MUG, Cray. Funny how the cross-town contacts are sometimes the hardest to make. Til March, Joe, W5QLF

Elecraft K2 and dipole inverted V, 4.4 Watts. Thanks to all 80m contacts. This is the most number of contacts in a long time. K4PQC stands out with 2 watts. Ken N4SO

Fairly rough evening - only heard and worked K3RLL/Don on 40m, spent the rest of the time on 80m.  Lot of repeats both ways, most stations at or just above my noise level.  Best station heard: K5BAI/John worked at 559, moments before he rose to 589/599 for quite a bit before Qsb set in again.  40m contact at 7.042, all 80m contacts around 3.560 +/-.  three stations worked were S&P, and three CQ SP.  Expected better response running but apparently not getting out well enough.  Checked on 40m occasionally, all was quiet on the 40m front.  Challenging but fun.  Stayed to the limit again, it's my job. Take care and stay safe,  72, Cray / K5MUG / San Antonio, TX

Very windy and chilly here in Bishop, GA 35 F but feels like 25. Lots of noise on 40 meters maybe from the wind across the antenna. I heard NØTA calling on 40 but couldn't make contact so I plugged in the 80 meter filter where that band was much better and a little quieter. 72' Phil - K4PQC

Worked only station, heard K3RLL very loud QRN here. I expect that everyone must have been preparing for the next day - Groundhog Day Celebrations! 72/72 Walt

Posted by Richard Fisher, KI6SN at 2:31 PM No comments: