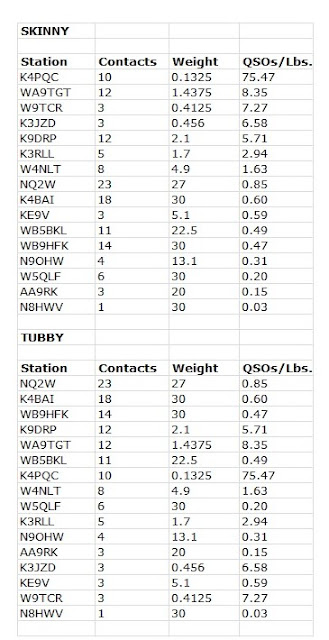 For an enlarged view, please click on the Scoreboard.
Posted by Richard Fisher, KI6SN at 12:19 PM No comments: 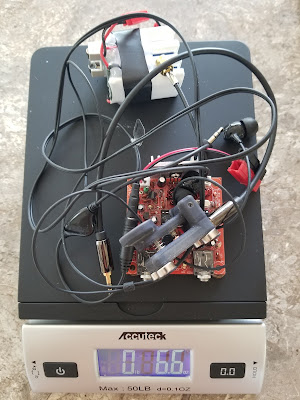 W9TCR: Reduced my weight by 50 percent and increased contacts 200 percent  (above).

Heavy storms here tonight so went with indoor antenna and I'm delighted to have been able to make a few contacts with it and the heavy static crashes on my old K1. Big signal into this corner of FL tonight was Will, NQ2W.  Thanks for the fun. 72 ... Don

Don't think we had as much activity this month. 40 sure was long! Ran my mcHF with a new "printed" key this evening. My apologies to W4NLT. I just couldn't pull you out on 40. But we made it on 80! I think next month I'll kick back with my RGO ONE and a bug and not worry about lite weight. 72,Don, K9DRP

Started on 20m. One RBN spot, no one calling, no one answering. Moved to 40m and made 14 QSOs. Moved to 80 and made 6 more. Back to 40 for 2. Back to 80 for 1 more. Two more called on 80 but it was after the Sprint ended. They're in the log but not in the score. Many, many snowshoe prints in the woods but I have a new 40m dipole up in the trees. Feedpoint is up about 60 feet. It seems to be working pretty well. Side by side comparison with the delta loops shows the dipole coming out on top. It's higher and further away from the surrounding trees. My XYL thinks I'm crazy...considering the amount of time it took to get it right where I wanted it...but the exercise was beneficial and I can hear much better on 40! Two banders with K4BAI, WB9HFK, WA9TGT, and K9DRP. Thanks for the Qs and for the opportunity to participate. I hope to hear to you all, and more, next month. 72 Will, NQ2W

Very late start and had to set the mtr5b up. Many CQs netted no response on 40 m. Switched over to the 30 pounder on 80 m and NQ2W came to the rescue with a last minute QSO. Thanks Nate, N8HWV

Started out on 20M and had lots of RBN spots from coast to coast, but no sprinters were heard.  Spent the rest of the time on 40M.  Worked 4 sprinters: NQ2W, W5QLF, K9DRP, and WB5BKL.  Thanks to WB5BKL for staying with me through many repeats.  The QTH was in Silicon Valley and the antenna was a Buddipole in horizontal configuration.  Rig was the MTR-3B with the N6ARA TinyPaddle Jack.  I started out with a 9V rechargeable NiMH that was giving about 2.5W, but after getting few replies, I switched to a heavier 12V Li Ion for 5W.  My weight is based on that heavier battery.  I hope we can get the word out about the SP to increase participation like it was in past years.  73 de N9OHW

Tonight I used my KX2, along with my EFHW wire antenna. Band conditions seemed pretty fair considering a storm had passed through just the night before. After about 50 minutes I switched to 80 meters which was the band I made the most contacts on. I tried 20 meters briefly but found no activity on 20 meters. Overall another nice night for the Spartan Sprint! Donnie Garrett / WA9TGT

Worked WA9TGT, WB5BKL, NQ2W. Not much to show for 60 minutes of S&P this month. Battery-powered KX3 at 5 watts using a CHA MPAS Lite in a ground-mounted vertical configuration for the first time. Not sure if the antenna underperformed, band conditions were “iffy” or if this operator just had a bad showing? Three contacts, one with a guy two miles down the road. Thanks for the contacts and see you again next month!

Before the sprint started I listened on 40 and 80 meters.as there was some activity,  I knew that I would be working on two bands... adding a little more weight.  Not sure if this is correct in the rules since I can only use one band filter at a time. The weather here in N. Georgia was warm and clear.  Band conditions seemed fairly quiet with only occasional static crashes..  Still, the loudest station I worked was John - K4BAI a little over 125 miles away. The two states with the most contacts were WI and TX. I did have one questionable contact on 40 meters and not positive of the exchange so I didn't include that contact. Again this was a slow start  and I decided to spend most of the time calling CQ SP but spacing the CQs so as not to deplete the battery. 72/73 to all and thanks for the QSOs, Phil

Well that was ugly. Started on 40M and worked stalwarts K4BAI John and WB9HFK Mark right off the bat. Heard and called several stations but no joy. Shifted to 80M and made the rest of my QSOs. John and Mark were 50% of my QSO total between the two bands. Noise was tough on the one good ear. Will chase some foxes tonight. Thanks for the QSOs and 72 / 73. Andy