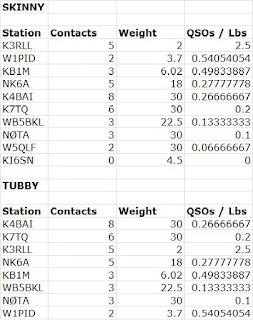 For an enlarged view, please click on the scoreboard.
Posted by Richard Fisher, KI6SN at 7:13 AM No comments:

W5QLF
Only heard two Spartans on tonight, both on 40 meters.  Thanks to NØTA in Colorado and NK6A in California for coming back to me.  You know propagation is bad when you don’t even hear John, K4BAI in GA.

K3RLL
Feeling overly confident from the good conditions last month, I plunged into our March Spartan Sprint with great enthusiasm, only to be faced with a S-9 noise level.  I ran around the house turning things off between contacts hoping that something here was causing the heavy QRN until John K4BAI told me he had the same thing up there in GA.  Good to know.  Thanks, John. Sure there were others out there tonight, but I think they were hiding in the band noise -- as I was to them.  It is with much appreciation that I submit the five contacts garnered through the great patience and skill of our other A.R.S. Sprinters this evening.  Thank you, ladies and gentlemen. Let's all hope for better conditions in April.   73/72 ... Don

K7TQ
A rough night in ID, but had a good time with my new KX2.  The Noise Reduction really helped.  Qs only on 40 and 80 and no one made it on both bands. With DST next month, I hope to get out and away from home.

NØTA
Bad conditions in CO. Worked the only three stations I heard, and they were very weak. Quit after about 30 minutes.  K3 @5w & vertical.  - 73, John

WB5BKL
K3/10 @ 5W to a 40M dipole or a 40M extended double Zepp.  I seem to adrift in the doldrums.  After my contacts with the two Dons on 40M - K3RLL and NK6A - it was over an hour until I worked K4BAI on 80M.  I heard, but could not work, K7TQ and NØTA.  I can say with absolute confidence that the best signal I worked on 40 was from Don - and John's was the best on 80.  That's three QSOs. I sincerely hope that every sprinter had better luck than I did this month.  However, as always, I had fun.

KI6SN
Efforts on 80-meters from Southern California turned out to be an exercise in listening. Heard, but couldn't work, WB5BKL. He varied from 329 to ESP and was the only signal heard in high noise. Way to go, Nick! CU all in April's Spartan Sprint.
Posted by Richard Fisher, KI6SN at 7:02 AM No comments: