For an enlarged view, please click on the Scoreboard.
Posted by Richard Fisher, KI6SN at 11:08 AM No comments: 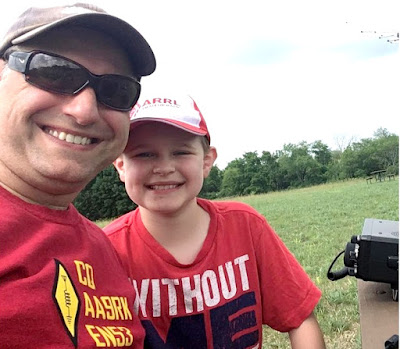 HISTORY MAKING SPRINT: Michael Falk, AA9RK, and his son, Max, KD9NZB, made ARS history in November when they operated as separate competitors in the Spartan Sprint - the first-ever father-son Sprint participants. In addition, Max, 10, is the youngest participant ever. "I have enjoyed getting back into CW this past year or two," Michael said, "and Max is having fun with it too. His interests in ham radio are very different from mine, but that's fine.  I'm glad he has interests in ham radio at all. He works on his CW occasionally, and he's also very casually working on his General exam pool." (Photograph courtesy of AA9RK)

Ten-Tec Jupiter to a mini-beam at 25ft for 20m, a full-wave delta loop at about 50ft for 40m, and a dipole at about 50ft for 80m. 1 QSO on 20m, 9 on 40m, and 8 on 80m. My 80m dipole is performing a lot better up here in the Adirondacks than my 80m near bottom-loaded vertical did in Albany. It's nice to have some space both horizontally and vertically. Two-banders with  K4BAI, WB5BKL, K7TQ, K9DRP, WB9HFK, and NØTA. I said it last month but it's worth repeating - it's great to be back. Thanks for the QSOs and thanks to Richard, KI6SN, for the opportunity created by the Spartan Sprints. Looking forward to next month...Will, NQ2W

Got 4 QSO quickly then things petered out on 40M. NØTA remained strong for a while. Ops limited to a 40M dipole. 73/72, Andy

Just used 40m. Conditions have been better.  Perhaps seeing some after affects from the recent solar storm.  Used my backup SOTA kit: FT-817 with a 21700 Li-Ion battery pack that I have been testing.  Has more capacity than my 18650 Li-Ion pack, but is a little heavier. 73 - Jody - K3JZD

As I did in October, I operated using my mobile setup, KX2 and Scorpion 680 antenna, from the top of the Lewiston, ID grade which has a 2,500 foot drop off favoring the east and south.  Below are the cities of Lewiston, ID and Clarkston, WA at the confluence of the Clearwater and Snake Rivers. Catching KI6SN was a treat.  We haven't had a QSO in quite a while. 40 m was good all the way to the east coast and 80 m yielded a Q to CO and one to NY. A fun evening.

Conditions seemed pretty decent; No contacts on 20m. 40m was the money band, but 80m was pretty good, also. Used the Omni VI and a 300' Horizontal Loop.

MTR-3B putting out 2 Watts from a 9 volt battery, with a light 3D-printed plastic paddle and earbuds for 9.8 oz.  6 QSOs: one on 20m and the rest on 40m. Antenna was a Buddipole in horizontal configuration.  QTH was in the San Francisco bay area. Good to hear and work KI6SN for the first time, as well as NØTA, K7TQ, NK6A, and two QRO stations who came by to give out points, KI5AL and W0CCA. 73, Mike N9OHW.

I started out on 40 meters and didn't hear any stations so I picked a spot and made a run for it. I only worked 4 stations on 7041 W5ESE, NQ2W W5QLF and WB5BKL. After calling CQ I noticed that my receive signals were intermittent and had some trouble copying. I thought at first there was quite a bit of QSB so after I didn't hear any more stations I swapped filters and went to 80 meters and immediately found John - K4BAI but right after I found out what the problem was: when I took the ATS- 3b out of the case I should have reinforced the antenna connector. The SMB connector broke loose from the PCB. I stopped for almost a half hour soldering the connector. About 0250z I was back on the air and then found KB9LLD. My LiPo battery had had a rest and was almost putting out 3 watts again. Even with a problem this sprint is still lots of Fun. 72 to everyone for the QSOs, see you next month, Phil.

I obviously haven't operated the Spartan Sprint in a long time, but decided to get in for a bit this time around.  Unfortunately, I needed a tuner, so instead of using one of the lightweight rigs, I used the KX3 to take advantage of the built-in tuner. Power by Eneloops, paddle was a Te-Ne-Ke Micro. I checked out 20 meters just before the start, heard nothing and got no Reverse Beacon action, so I headed to 40 meters. Pretty good reports on RBB initially, with noticeable reduction in signal strength after about a half hour. I gave up after an hour or so and listened for a few minutes on 80, but heard no Sprinters. I look forward to the next time I operate being able to go tuner-free and use one of the KD1JV rigs. Thanks to all for the QSOs - good to hear some familiar calls I haven't heard in a while.  And thanks to KI6SN for keeping the Sprint going! 73 de Lee, AA4GA

First time participating in Spartan Sprint. Operated for one hour on 80m only with full 80m loop antenna up 25-30 ft. 73, Tony, KB9LLD

Had to quit early tonight but still had a fun run. Lots of 2 band contacts tonight. Got to work Richard, KI6SN on 40! Good to hear NQ2W on 80 this evening. Ran the Argo VI getting ready for tomorrow's fox hunt.  Let's do it again next month. 72, Don, K9DRP

Back in Florida for the winter and life under the tyranny of my HOA and their Draconian antenna restrictions. So very happy for the contacts tonight, and they were good ones! My wet string antenna somehow improved over that half-hour. Big signal was K3JZD in PA. The Spartan Sprint has provided a lot of fun for quite some number of years now. My thanks and appreciation to ARS staff and management. 72/73, Don K3RLL