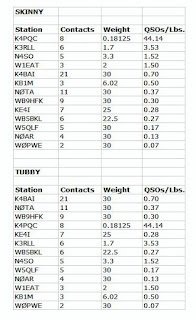 Please click on the Scoreboard for an enlarged view.
Posted by Richard Fisher, KI6SN at 11:44 AM No comments:

40M was dead. From my RBN reports I would have thought 80M would have been more productive but I only worked 2 stations. Thanks N4SO and W1EAT for the contacts. Running a homebrew multiband XCVR at 5 watts out to an 80M doublet with remote balanced antenna tuner. 73 - Jerry

All contacts on 80m, and this is better than my average on 40m.

Running the KX3 at 5 watts to 88' dipole or 43' vertical. Conditions were dismal at best. I worked John K4BAI on 40 and the other three stations on 80. Best signal was John NØTA from CO. Other signals lost in the QRN. I gave it an hour and it was time to QRT to the TV. 72 Scott NØAR

Interesting evening - barely heard (did not work) one station on 40m. All contacts on 80m, NØAR, MN, was the loudest, by far. Thanks for the Qs. K3, doublet, GenLog.

Slow start with minor local technical frustrations but pleased that six skilled ops with good ears found me this evening on 40m. Big signal tonight was K9DRP, just booming into FL. Sure wish I had 80m capability. I suspect that is where the party moves about 30 minutes into the festivities. Thanks for another enjoyable Sprint.  72/73 ... Don

Great day here in Bishop, GA not a cloud in the sky and the bands were fairly quiet at least on 40 and 80. Signals that I heard were strong and also the most stations I worked all year on the Spartan Sprint.  And, I'll bet that everyone else who participated in January's Spartan Sprint can say the same! Wishing everyone a much Happier New Year. - 72, Phil - K4PQC