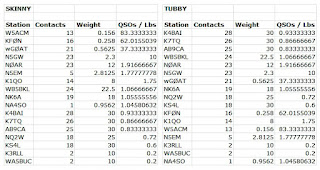 For an enlarged view, please click on the Scoreboard.
Posted by Richard Fisher, KI6SN at 8:12 AM No comments:

K3RLL
Was really fired up for the Sprint tonight after receiving the full-color, special edition certificate for participating in the 2016 Leap Day Special Spartan Sprint.  And both the turnout and band conditions seemed vastly improved this evening but we just stuck on 40 meters and enjoyed the ride, S.T.S.  Enjoyed hearing from so many familiar Sprinters.  Big booming signal here was K4BAI. See you next month.  72 .. Don

W5ACM
Fun Times! I managed to work K7TQ and NK6A on 20M before migrating to 40M. Most contacts were on 40M, but had four really good QSOs on 80M with K4BAI, AB9CA, WB5BKL and N5GW. Still using the ATS-3a with two 170 mAh LiPo batteries, providing 3W out to my antique 18AVQ vertical. The LiPo batteries are really getting bloated, but I will run them until they blow! Always hoping for more 20M ops! 72 de Andy W5ACM - Houston, TX

N5GW
I fired up the KX3 with internal bats to 2 watts. The internal ATU was used to load up the CFZ at 50'. I was hoping 20M would open up this time of year, but I only heard/worked K7TQ and NK6A. 40M was a bit noisy from approaching storms, but fairly good. 80M was much noisier but yielded eight Q's including K1QO up in NH. Two banders with K7TQ, NK6A, K4BAI, K1QO, KS4L, NØAR, NQ2W, and WB5BKL.

AB9CA
You know, I really ought to weigh my gear one of these days. Used the K3 at 5w to 100' wire. Found out later that one side of the wire had opened up. Solder joint broke at the feed point. Did not know that that the time. But the tuner required different than usual settings so was suspicious of something, but ran anyway. Did no harm at 5w. But I was about 3 dB down. At first I thought I was the only one on the air. Got no responses on 20. Went to 40 and still nothing. Scanned the band and heard no one else calling. Thought maybe I had the wrong night. But about 0220 began to get some responses. Worked 15 on 40 and 10 on 80. 40m SPC's were OK NC MN CA(2) NH(2) CO IA TX(4) ID NY. Down on 80 worked CO GA AL FL NH MS MN VA TX(2). Two banders were WG0AT, K1QO, NØAR, W5ACM, and WB5BKL. Good to hear some new calls. Everyone be sure and join in again next month!  73 de dave, ab9ca/4

KFØN
I was good to be back after over a year hiatus.  I don’t think I have ever worked so hard for the sixteen contacts!  Our fraternity of ARS participants seems to have dwindled significantly.  Band conditions were a little soft here;  A index=17 and K index of 3, but never the less, 20M yielded two QSO’s .  Next month should be better for 20 with more sunlight on ye old Heavyside layer.  I was able to work both east and west coast with contacts with NY and CA.  I dropped down to 80M after 40 quit yielding any more QSO’s but 80 seemed to be plagued with high absorption pluss high QRN from the thunderstorms down south.     WB5BKL, Nick, had a 559 signal here but I just couldn’t break through the QRN on his end which I knew must have been high due to the storms down his way.  At about 2045 CST, my little LiPo battery grunted out it’s last milliwatt and died, so it was time to call it an evening! Thanks to all who participated. 72’s Larry, KFØN

NK6A
7 contacts on 20 and the rest were on 40M.  Nice to have the bands cooperating a bit more than the last two months and the Leap day event. Managed to get K1QO on 20 before the band closed down. My antennas were down quite low that night because of a bad storm in the mourning. I hadn't raised them up yet but decided to just have a go at it. 14 different states.  Not bad.

K7TQ
Conditions and participation much better than a week ago.  Started out on 20 m with CQ answered by WG0AT.  Great way to begin.  20 m was good for 10 more Qs until 20 minutes after when I switched to 40 m.  Good turnout there too with another 15 Qs until I called it quits at 0320 Z with no more Qs for 15 minutes.  Two band folks were wG0AT, N5GW, NK6A, KF0N, KS4L, W5ACM, NØAR, and WB5BKL. Hopefully for April's SP I can get up into the mountains.

Posted by Richard Fisher, KI6SN at 7:53 AM No comments:

It is quite possible to homebrew your own project boxes, starting with a flat piece of aluminum. An 8x12-inch piece of aluminum at The Home Depot is less than a dollar and can be easily transformed into a project chassis 8-inches wide, 4-inches deep and 1 and 3/4-inches tall. Fancy metal-working tools needed? Absolutely not. This one was made in the 73 Radio Row workshop with a hand drill, awl, hacksaw, vise and a straight edge of metal or wood. It is really easy to do if you are willing to invest an hour-or-so. When was the last time you've said "Rig here is homebrew, including the chassis"? The photographs below tell the story of how it is done.Try it. You have less than a dollar and an hour-or-so to lose.

NOTE: http://www.73RadioRow.com is proud underwriter of the Adventure Radio Society. Please click on the images for a larger view. 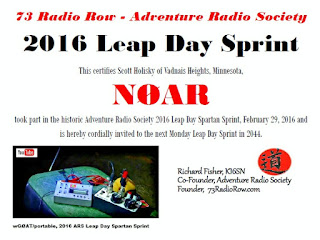 For an enlarged view please click on the image.


73 Radio Row, http://www.73RadioRow.com, in its partnership with the Adventure Radio Society, generously provided the certificates for the historic 2016 Leap Day Spartan Sprint. Every operator submitting SP data was awarded this commemorative document. 73 Radio Row is an underwriter of ARS activities.
Posted by Richard Fisher, KI6SN at 8:06 AM No comments:

For an enlarged view, please click on the Scoreboard.
Posted by Richard Fisher, KI6SN at 3:28 PM No comments:

WG0AT
I only made 4-QSOs before the wind blew over the tipi! Click here to see a little video I made from Monday’s adventure!

K3RLL
Having an extra Spartan Sprint on Leap Year day sounded like a pretty neat idea to me. Unfortunately, I didn’t hear many Sprinters on tonight. 20m was dead here. 40m was pretty sparse.  Look for you all next week for the March Spartan Sprint.  Thanks … Don K3RLL

K7TQ
I only had half an hour to operate.  20 m was open for the first 20 minutes, at least, but I heard and worked only WB5BKL. Thanks to all who stopped by.

NE6SW (ARS Club Call)
Conditions on 40-meters Monday night were pretty challenging. Out of the noise I copied WB5BKL. He could hardly hear me, but stuck with it to complete the QSO. Thank you, Nick! Will look for everyone on March 7. Vy 73, Richard Fisher, KI6SN, 73 Radio Row, http://www.73RadioRow.com

W5ACM
Still using the ATS-3a with two 170 mAh LiPo batteries, providing 3W out to my antique 18AVQ vertical and a final total of FOUR QSOs for the Leap Day Event. For me, 20M was DEAD and 80M was way too noisy. Everything happened on 40M from my QTH. Many thanks to K7TQ, KK4BNC, N0AR and WA4ZOF for the contacts. Looking forward to the March Spartan Sprint – only days away! 72 de Andy W5ACM - Houston, Texas

Posted by Richard Fisher, KI6SN at 3:20 PM No comments: