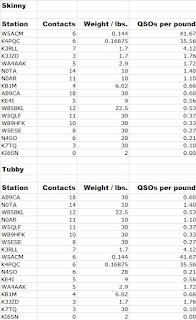 For an enlarged view, please click on the Scoreboard.
Posted by Richard Fisher, KI6SN at 1:52 PM No comments:

It was all 40M or 80M for me, but the QSB was difficult. There were a few new folks in there! I was glad to hear good ops on 40M. Although my ATS-3A can’t do 15M, it is quite effective on 20M, so I hope upper band conditions will improve. I am really getting a bit skeptical about the longevity of my elderly 130 mAh Lipo batteries,  I will watch them closely over the next few months. They are not puffing up, but I could not do the complete two-hour event without serious power drops. I was actually down to less than 2 Wats for the 80M contacts with AB9CA and WB5BKL. 72 de Andy W5ACM, Houston, Texas.

Windstorm damaged the antenna but still had a fun time. 73, Walt

Earlier this month hurricane Zeta came roaring through GA heading toward the Carolinas. I didn't notice that some branches that were holding up my loop had broken but the antenna was still up. During the afternoon of the Sprint the antenna fell partway to the ground.  There wasn't enough time or light left to reinstall the loop so I operated anyway with wire wrapped around several branches. The most active station heard was Arn - K0ZK with an exceptionally strong signal from  Maine. 72 de Phil - K4PQC

Used the Omni VI and a 300' Horizontal Loop. Nothing heard or worked on 20m. 40m was in pretty fair shape, though.

Conditions were all over the place. Good to work familiar calls. Bands of choice 40 and 80. Rig was KX3 @ 5 watts, 43-foot vertical antenna did the work. 73, Scott

Only spent one hour this month. Fun time, however.

Another enjoyable sprint! Started on 40 and stayed for 30 min. Seemed to have worked everyone who could hear me. Logged 8 Qs, 5 of which were from TX. Also CO, ME, ID. Then moved to 80 and logged 4 of the pesky Texans again along with GA VA PA IL MN. Thanks to everyone for the fun evening! Hope to hear y'all again next month! 73 de Dave, AB9CA

New to me basic K1 feeding my after dark only stealth 4-BTV. (Darned HOA) 40m seemed to have a fair selection of participants this evening but most weren't hearing my booming signal but then who knows I how many I couldn't hear.  Reverse Beacon was not my friend this evening with low single digit SNR reports. So, I greatly appreciate those seven skilled and patient A.R.S. Ops with the good ears.  72/73 ... Don K3RLL

Conditions on 40 meters were practically non-existent, making chances for a Spartan Sprint contact Slim to None. And Slim just left town. It turned out to be a couple of hours of serious listening. Could barely hear a few stations in Texas, but couldn't catch their callsigns. Just the same, it was a lot of fun listening to band conditions vacillate between "I can barely hear anyone" and "ESP." Look for everyone in December! - 73, Richard

Started on 40 m with a nice SK chat with a BC ham then only two more Qs over the next 45 minutes.  November SPs have always been challenging.

Strange evening: 2 contacts in the first hour, 12 in the second hour. All on 40m. QCX Plus, Doublet, and GenLog.

Posted by Richard Fisher, KI6SN at 1:48 PM No comments: