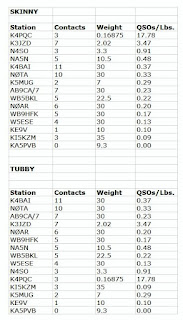 For an enlarged view, please click on the Scoreboard
Posted by Richard Fisher, KI6SN at 1:04 PM No comments:

Bands lousy compared to past few days due to long duration solar flare earlier. Worked 5 on 80; nothing hrd on 40M with old Ten Tec Argo. Worked NØTA, K4BAI, WB5BKL, NØAR and AB9CA/7. Called WB9HFK 812 times no luck. Gotta be better next month.  72 to all. NA5N

Pretty much a BUMMER tonight! Tuning across the 40 meter band I heard practically NOTHING in the CW portion of the band! Blasted away with my 650 milli-watt Little Joe (from September 1981 QST magazine. Called CQ SP for 1.5 hours and NO JOY at all here. Note - this xmtr is rock-bound and operated on 7.038 KHz. all evening. KA5PVB, no QSO's, station weight as follows:

Maybe next month will be better for this Sprint! Hope everyone has a very Merry Christmas and a Happy New Year. 73, Chuck, KA5PVB, Alpine, TX

Station: IC-7200 at 5w to vertical. No activity on 40, all Q's on 80. Maybe the ant needs some attention on 40? Worked only MN TX CO GA NM. John, K4BAI, in GA has magic ears and can hear anything. Being in AZ tended to skew things to the west. Also have a noise issue here which does not help. Thanks for the Q's, maybe things will be better next month. 73 de Dave, AB9CA/7

That was sure an interesting sprint. No signals heard on 20 or 40 meters. 80 was it for the duration. Rig Kwd 590sg and 43' vertical. RX loop antennas and muffs. Happy Holidays.

Thanks to contacts  WB9HFK, K0ZK and W5ESE. Missing a few call signs. Rig this time was the Elecraft K2 and a 40 meter half square. Ken, N4SO

Had to use my not quite so Spartan KX3 to be able to utilize 80m.  Not much was happening on 40m in my neighborhood.  Even 80m was kind of long.  And I got pretty lonely during the second hour - I guess everyone was social distancing.   KX3 with LiIon Battery Pack running 5w with KØMBT 3D Printed Mini-Mini Key and Earbuds to an End Fed Random Wire.   73 & MC - Jody - K3JZD

Wanted to make it for the final SS of the year. KX3 with a battery and random wire antenna. 40 was so noisy I gave up and moved to 80. Copied several sprinters there but they weren’t hearing me. Finally managed to work K4BAI so as not to get skunked. See you for the next one in a New Year. Happy Holidays! 73 de KE9V

Unfortunately I was tied up on a project and lost track of time and didn't start the sprint until about 1/3 of the way from the end.  I already had last month's 80 meter band module plugged into the transceiver and immediately heard John - K4BAI so I would stick with 80 meters.  The band was unusually quiet and I was able to work Then Mark - WB9HFK in IL with a strong signal and finally Jody - K3JZD with an extremely strong signal from PA. Between working these stations I also called CQ SP without any results.  Not as good of a performance as in previous months but fun nonetheless.